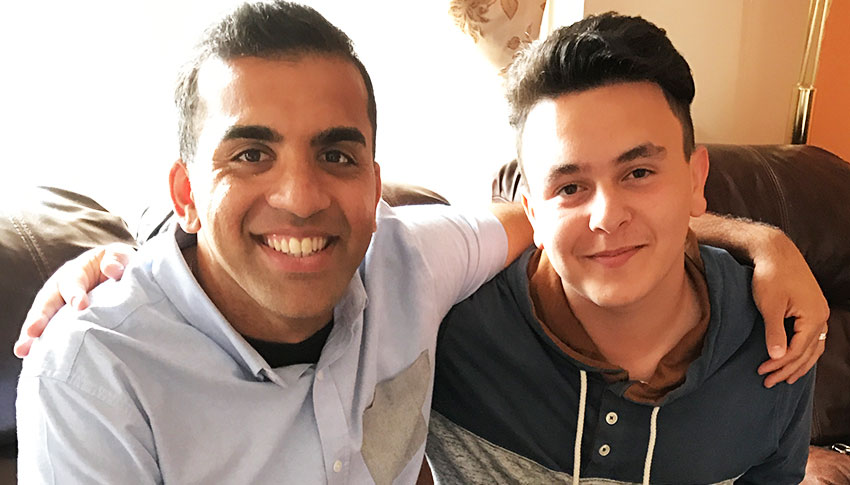 Leaving behind their homes, their jobs, and their support systems, many Chaldean families leave Iraq to build new lives in the United States.

Chaldeans are Christians who often experience intense persecution in Iraq. Many families settle in Michigan or San Diego, where there are large Chaldean communities. Big Brother Jason’s parents immigrated to the U.S. in the 1980s, and he grew up in a Chaldean community in San Diego.

He says that even though he was born in the United States, adapting to American culture is an everyday battle. “We’re an Eastern culture going into a Western culture, and while we do take on some Western things, there are some Eastern things we don’t let go of, and that can be hard,” he says.

A new program through Big Brothers Big Sisters of San Diego County is focused on making that transition easier for Chaldean youth.

Almost three years ago, Bryan Bazzi, a tenant representative for the commercial real estate company CBRE, saw that youth in his community weren’t always using the resources available to them. “I spoke to friends and learned that they credit their success to positive role models,” he says. He decided to start a mentoring program for Chaldean refugee youth. He partnered with Big Brothers Big Sisters and started planning.

First, Bryan had to make sure this program would work for Chaldean refugees in San Diego. He assembled an affinity group to work on raising funds and recruiting Bigs and Littles. He strategically chose the members of the affinity group to be representative of the Chaldean community and worked with political figures and religious leaders in the community to garner support.

“They understood it, they accepted it, and they said they would back it up,” Bryan says. “Once you have that kind of support, people want to know more and they want to be involved.”

The program, called “Ayana,” which means “help” in Arabic, launched in January. Jason is the Ayana program’s first Big Brother.

A structural engineer in San Diego, Jason says it was the guidance of a friend who recognized his math ability and guided him into engineering. “My dad worked a lot, and he didn’t understand how it worked here, how AP classes worked, how to apply for college, how to get scholarships,” Jason says. “My friend made me aware of what’s around me and what life has to offer me.”

Now, Jason will help Little Brother Yousif with those tasks. “I feel like these kids can accomplish so much, if they have confidence in themselves, if people give them confidence.”