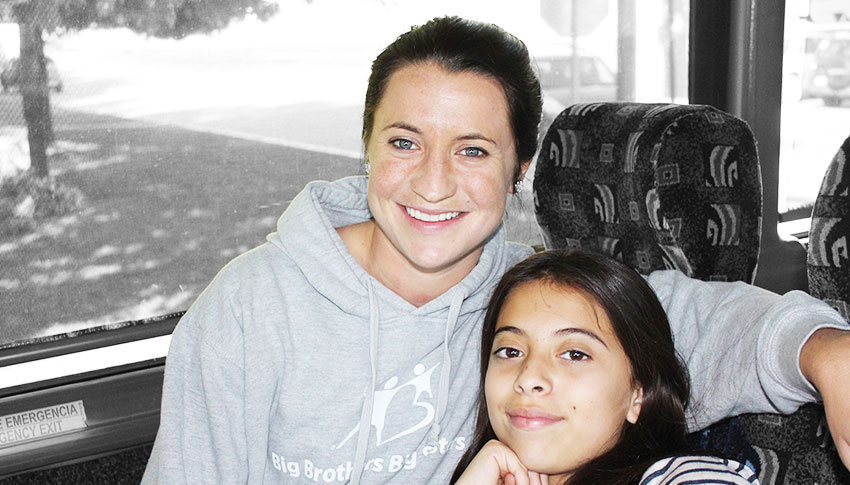 Having everything in your life figured out isn’t a requirement for being a Big. Seven years ago, Big Sister Chelsea was a little lost. She had just dropped out of her second semester of college and she didn’t know what she wanted to do with her life. She did know she wanted to give back to her community, so she signed up to be a Big Sister. She was matched with Little Sister Esmeralda.

Going to Esmeralda’s house for the first time, Chelsea was nervous, but right away, sassy, outgoing Esmeralda made Chelsea’s nervousness vanish. The two bonded immediately. They began meeting every week and their bond grew. It wasn’t before long that Esmeralda was excitedly greeting Chelsea and calling her “Sis.”

One day, when Chelsea picked her up, Esmeralda was crying, having just failed the third grade. Esmeralda was now the one a little lost. Over ice cream, the two talked about what to do next.

“Chelsea is the best thing that has happened to my daughter.”

“We decided we would practice reading that summer, so that she would be an even better reader after the summer,” Chelsea says. Esmeralda was eager to start and wanted to read right then to get better. They worked on it constantly, reading a couple of books each time they saw each other.

Before long, Chelsea no longer had to read the menu for Esmeralda when they went out to eat. The next year, she passed third grade. “I didn’t know I was capable of being so proud of someone, and I couldn’t stop smiling,” Chelsea says.

Chelsea and Esmeralda both looked forward to when Esmeralda’s father was set to be released from prison. She was buzzing with excitement. She had looked forward to having a dad for so long. “Over our four years of being matched, she talked about how much she missed him and about how she didn’t really know him since he was in prison for over half of her life,” Chelsea says.

But in the first three months after his release, he saw Esmeralda only once. In the past year, she hasn’t heard from him. The relationship she was hoping for was not the relationship she was getting. Big Sister Chelsea helped her deal with her disappointment and move forward. “I continued to be there for her, listening to her stories as well as watching her cry about her father,” she says.

Chelsea and Esmeralda are still matched, and Esmeralda is gaining confidence and self-esteem all the time. But Esmeralda isn’t the only one who has grown since their match first started out. Mentoring Esmeralda has had such a positive effect on Chelsea’s life that she decided to study social work, and she’s now working towards her master’s degree. She plans to pursue a career helping children facing adversity.

Both Chelsea and Esmeralda, together, have come a long way since the days they were a little lost.