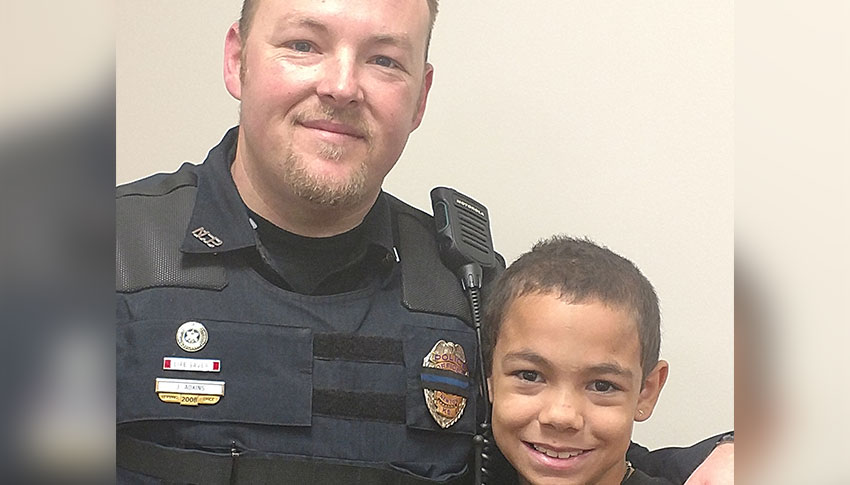 “My experience is that, as a grown-up, the hardest part is asking other grown-ups for money. It’s a little bit awkward,” Jon says. “But once you get over that and realize that people are good and want to give to good causes, and if you can get past asking, you find out that people are more than willing to help.”

Being in schools every day, it was natural for Jon to volunteer with Kansas Big Brothers Big Sisters’ School-Based Mentoring Program. He became a Big Brother to Little Brother Cuba three years ago.

“I think if I was somebody who didn’t have this profession, I don’t know that he would be as proud of it,” Jon says. “It feels good – here’s this kid who gets this huge self-esteem boost, who is so proud because of badge and the uniform, and me.”

Being involved with elementary kids is important to Jon as a police officer. Generally, he says, officers are reactive to crime. People call when something bad happens. Officers react. But being involved with young kids allows him to be proactive.

“If I can make sure a child has a positive experience now, hopefully by the time they go to high school, I’ve been able to mold their perception of law enforcement, their understanding of good and bad,” he says.

As a Big Brother to 8-year-old Cuba, Jon spends an hour each week shooting hoops, figuring out problems on a math worksheet, or toppling wooden Jenga towers. Recently, Jon brought Cuba a special pepperoni pizza for the two of them to share during their lunch.

To help make sure more kids have the chance to be matched with Bigs, Jon volunteered for the local advisory board and the BFKS committee. He attributes his fundraising success to the good-natured competition among the other dedicated volunteers and his BFKS teammates. “You don’t have to have a giant population to make a difference,” he says. “You just need the motivation.”