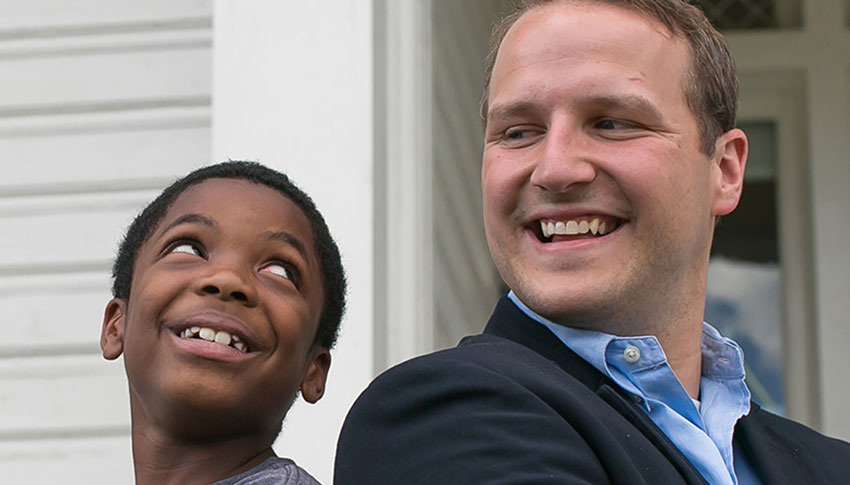 For almost two years, Ryan has been the consistent and positive male presence that Robert needed. Robert’s mom has been a wonderful supporter of her son, but faces the demands of working two jobs and having four other children to take care of. Ryan has been able to focus on the things that Robert was interested in but didn’t have the opportunity to do.

Ryan is a detective, and he leads an active lifestyle. Robert was interested in sports, but had never been able to play on a team. Robert’s mom simply didn’t have the extra money for lessons, gear, or fees.

When summer approached, Ryan knew Robert’s family wasn’t likely to have money for a sports camp. He found one through the local Minor League Baseball team and got his fellow officers to donate old equipment so Robert could participate. Pretty soon, Robert was all about baseball.

“That’s all he talked about,” Robert’s mom says. “[He was] wanting to run, wanting to be a baseball player. But it’s hard to say ‘this is what he’s into,’ because he’s into everything. He loves everything.”

Later in the summer, when Usain Bolt and other Olympic runners were all anyone talked about, Robert got the running bug. Ryan took him to the police gym so he could run sprints. Ryan timed him with a stopwatch.

“Now, everything is sprints,” Ryan says. “I pick him up from school and he wants to run sprints, wants me to time him.”

Almost two years ago, Ryan and several of his fellow officers became Big Brothers through BBBS of Southwest Virginia’s Oliver Hill program, in which volunteers, including members of the law enforcement community, are matched in one-to-one mentoring relationships with elementary school children. The mentors, Big Brothers or Big Sisters, meet their Littles each week at a set time.

When Ryan and his fellow volunteer officers first walked into the classroom in uniform, the kids shied away. “They were actually a little fearful,” Ryan says.

“ Above all else, we want kids to know we’re a safe place. ”

Returning week after week to work one-on-one with their Littles and to do activities with the entire group, the officers gained the students’ trust. Now, when Ryan and the other officers visit the neighborhood where the students live, they are excited. They shout hello to them, point out to other kids that they know those officers.

Another child spoke up. “Shoot people,” he said.

Robert had to say something. “No,” he said, “that’s not true. My Big Brother is a police officer and he doesn’t shoot people.”

Ryan tells this story as a testament to the impact positive, caring adults in the law enforcement community can have on kids, but he is just as eager to talk about the effect mentoring Robert has had on him. Being able to get to know his family has changed his life, he says. “When you’re a police officer, a lot of times, you deal with the one percent of people who are negative. You can get jaded,” he says. “99 percent of our interactions are with that one percent. That’s why I wanted to do this. Being in the neighborhood with the kids, you get to see how good people are.”

To learn more about Bigs in Blue, please visit www.bigsinblue.org.