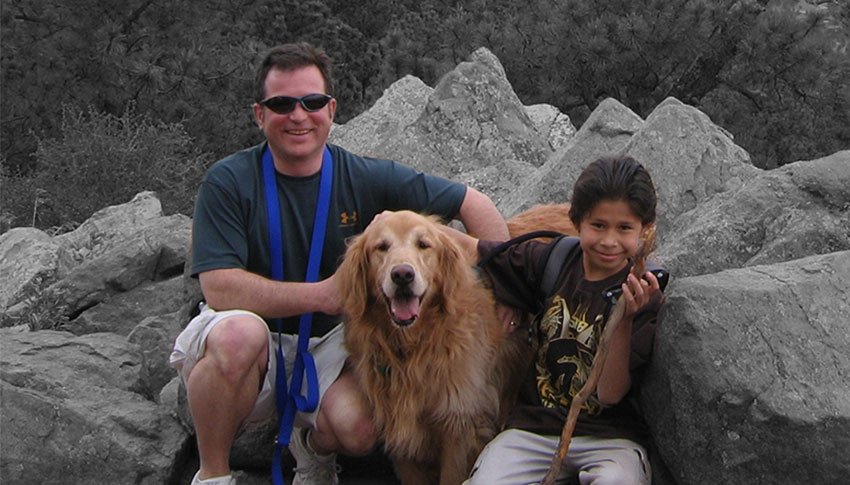 When Big Brother John and Little Brother first met, Dominic was a shy, energetic 8-year-old. With little contact with his father, he had developed trust and anger issues that ran deep.

“Through his life there were a lot of male figures who always let him down,” Dominic’s mom says. A single parent whose disability and means kept her from being able to give Dominic opportunities that she wanted to, she decided to enroll him at Big Brothers Big Sisters of Colorado.

Big Brother John concentrated on giving Dominic opportunities to try new things and learn new skills, like golf and snowboarding, but he also tried to make sure that Dominic was learning manners and social skills along the way. Through BBBS of Colorado, the two of them got the opportunity to take golf lessons. Dominic says he never imagined he would like golf, but it turned out he was a naturally good putter.

During one lesson, Dominic missed an eight-foot putt. He grew angry quickly, and knocked someone else’s ball off the green. Big Brother John dealt with Dominic’s anger right then, telling him that it was okay to be upset, but that it wasn’t okay to deal with it by taking it out on someone else. “He was upset with me and did not talk to me for about a half hour, but we went back to that lesson,” John says. “As we got into my truck to leave, Dominic apologized and told me he would not do it again.” One-on-one moments like this have allowed Big Brother John to listen to Dominic, acknowledge his feelings, and help him move forward.

“I tell people the best thing you can do is volunteer. It helps you put your life in perspective, and I feel it changes your priorities for the better. It has not been easy, but more rewarding than I could have imagined.”
– Big Brother John

Big Brother John has also tried to help Dominic plan for the future. His first goal has always been to simply be there for Dominic, to not let Dominic down. He says he focuses on “showing him how to treat others, and how to carry himself in various situations. Also helping him to set goals, like finishing high school, thinking about and planning for college.”

Dominic’s mom says she thinks her son’s teenage years would have turned out a lot differently if he hadn’t had a Big Brother like John. “Without John in his life, he wouldn’t be graduating, he would be really disrespectful to adults, and getting in a lot more fights,” she says. Having John there to deal with his behavior and support him in his efforts to change his actions and his perspective has been key.

Dominic got a job after graduating high school and is now enrolled in college.

The most important part of their relationship, Dominic’s mom says, is that John is there for her son no matter what. “John has helped Dominic the most by being there for him and not disappointing him,” she says. “He was there for everything in his life since he was 8 years old, and he never let Dominic down.”