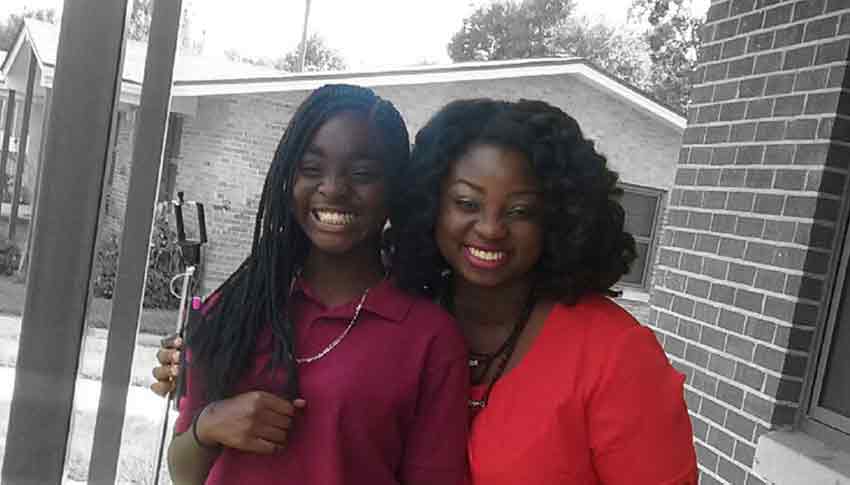 Big Sister Deborah always knew she would go to college. Her dream was to become a nurse. Her family valued education, and her father pushed her to focus on school and what she wanted to accomplish in her life.

She sees some of her own father in her Little Sister’s mother. They bonded right away. “She will go above and beyond her call of duty to make sure she provides the best care for her children,” Big Sister Deborah says. “She truly believes in education, and she will do everything it takes to provide that.”

Little Sister Deahajah’s mom enrolled her in Big Brothers Big Sisters because, as a single mother, she thought it would be good for Deahajah to have another caring adult in her life and because she saw Deahajah struggling in math and reading. Deahajah says her Big Sister inspired her to focus and try harder. “When I was struggling in subjects, she came and helped me,” she says. “Education is very important to her and her family, so she shares her values with me.”

“She always reaches her goals. She teaches me to do the same. She showed me that I can be great too.”
– Little Sister Deahajah

Deahajah has also learned to cope with bullying and overcome the temptation to act out in school. Deborah has learned to be patient with Deahajah and to coach her through tough times rather than get frustrated when Deahajah gets in trouble at school. Together, they have made progress with Deahajah’s behavior and academics. “It’s hard to explain to a child that it is not always good to satisfy your momentary passions,” Deborah says. “Slowly but surely she is coming to understand.”

Becoming a Big Sister was a way for Deborah to acknowledge that she had been supported and encouraged as a child and a way for her to give back. She hoped to inspire her Little Sister to value herself and have confidence to pursue her dreams, as Deborah had. What she didn’t imagine was that these effects would also extend to her Little Sister’s mother. “Not only has she taught my daughter things, but she has also taught me,” Deahajah’s mom says. “She encourages me to go back to school to further my education.”

A trusting, one-to-one relationship often benefits the Little’s family, and it can also have a big impact on the Big. Deborah says that after three and half years, she truly sees Deahajah as family. “She is my motivator,” Deborah says. “She watches me, so I need to continue to live my life in an upright fashion.”