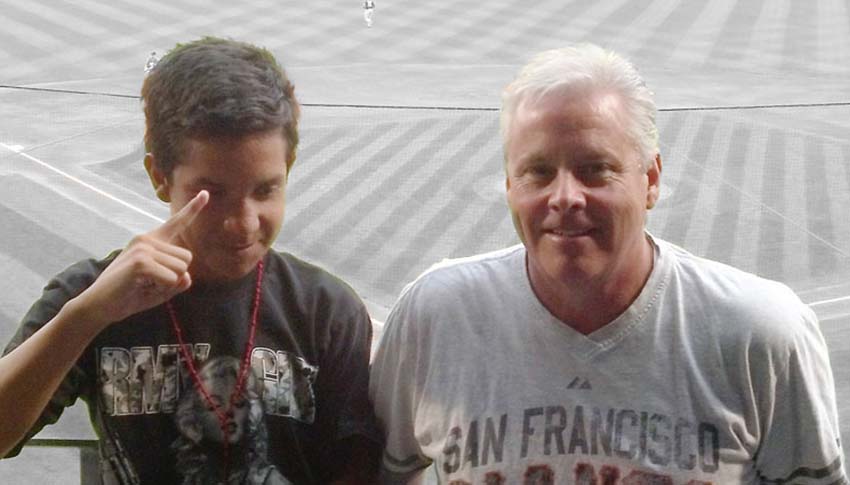 After his father left, Horacio was missing more than someone to toss a football with. He was in need of a positive male role model who could show a boy through his example how to be strong and kind. Big Brother Ron has been an example of those things for Little Brother Horacio. “My natural instinct was to offer advice as if he was my child,” Big Brother Ron says, “but instead I willed myself to listen and to put myself in his shoes.”

Big Brother Ron entered Little Brother Horacio’s life just as Horacio’s father was leaving. “We were going through a tough time when his dad left home,” Horacio’s mom says. “Horacio was lonely, sad and depressed by the abandonment by his father.”

For the past five years, Big Brother Ron has been a steady role model in Horacio’s life. They throw the football around, attend Minor League Baseball games, and fold and fly paper airplanes in the park. Ron talks to him about the importance of getting good grades, and how that will help him fulfill his dreams.

Being a Big Brother is not always easy. One day when Little Brother Horatio came home drunk and high, his mother’s reaction made him worry about how his Big Brother would respond. “My mom was very worried about me and was sad to see me that way,” Horatio says. He even went to his match support specialist to talk about his poor choices before explaining what happened to his Big Brother.

“Being a Big means being a friend. I’m not there to judge him, but to offer understanding, care and direction.”
– Big Brother Ron

“Ron and I talk about anything, including my poor decision-making,” Little Brother Horacio says. He says he stopped drinking and using drugs, and is motivated to do better in school. “I want to bring my grade up to at least a B and do well in school, not only for me, but also to make my Big Brother proud of me,” he says. As Horacio has worked to make better choices, Big Brother Ron has been there to support him. “Thanks to Ron, Horacio has stopped using illegal substances and has done a great job at avoiding gang involvement and other risky behaviors,” Horacio’s mom says.

Little Brother Horacio told his Big Brother that he aspired to be a Marine. When Big Brother Ron asked why, Horacio said it was because as a Marine, he would be able to make a difference. “I thought about this and realized this little boy has a huge heart and cares about people,” Ron says. “In his own mind, he’s projecting himself as a hero in real life.”

At this point, improving his social choices, avoiding peer pressure, doing well in school, and preparing for college are things Horacio wants, but they are things that seem incredibly challenging. Ron tells him to enjoy the journey along the path, not just the end itself, but the path forward seems about as easy as climbing Mt. Everest, Ron says. “But I encourage him, and let him know that all of us have looked at that same mountain,” Ron says. “If you take one positive step at a time, you’ll get there.”