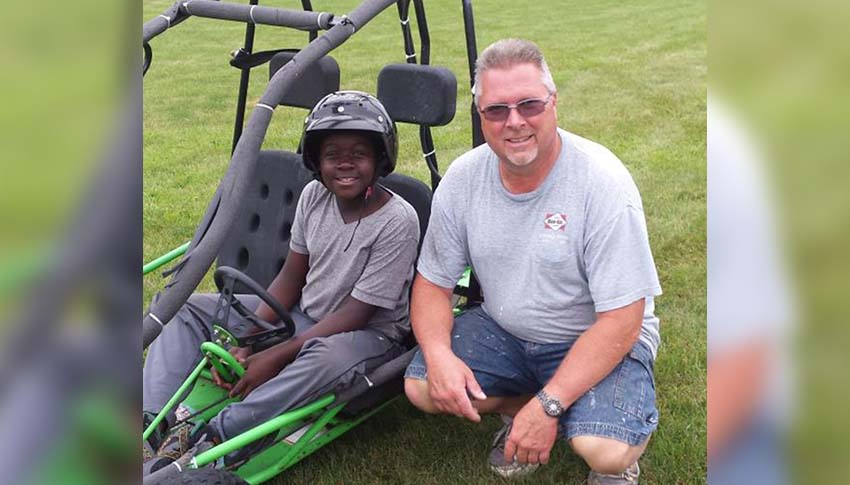 When Little Brother Deonte met his Big Brother Alan, he was struggling academically and was displaying negative behavior at school and at home. He would disrespect his teachers and get into confrontation with is peers. Deonte was diagnosed with ADHD and found it very difficult to maintain focus. Alan, from the beginning of the match, provided Deonte with the encouragement, guidance and consistency that he needed in his life. Their match started through a school-based program where they met once a week at school during lunch/recess period. Here they would eat lunch and play a game, do school work or practice lessons on the computer. The match grew and evolved to a community-based match. Here they would have the opportunity to do more activities and spend more time together.

As the school year begins, Big Brother Alan helps his Little Brother get ready by going shopping together for school supplies. They also enjoy bowling, golfing, roller skating, swimming, fishing and attending University of Illinois sporting events. With every activity that they participate in, Big Brother Alan ensures that he creates an opportunity for his Little to learn new skills. For example, when they go fishing, he is teaching Deonte the importance of patience and the great result that can come from it. Another example was when Deonte learned to ride four wheelers, Big Brother Alan emphasized the importance of safety.

All of these activities have helped nurture a bond that they both share. “I believe over the past five years, Deonte and I have developed a special bond where we have learned to trust each other, and can be open and honest in our conversations,” stated Big Brother Alan. This bond grew even stronger when Deonte’s 20-month old brother was killed in a hit-and-run accident. Alan knew that Deonte needed him more than ever, and he immediately went to Deonte and was there to help him sort through his emotions. Little Brother Deonte was able to cope with the loss and grew closer to his Big Brother. One day he asked Alan, “Will you be my Big Brother when I get older?” in which Alan responded, “Sure I will, if you want me to.” It was here that Alan knew that this match would result in a long-lasting friendship.