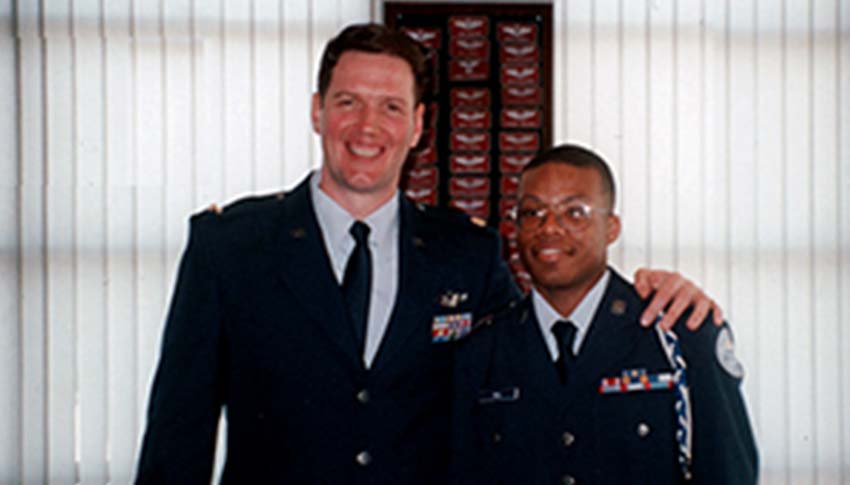 At age 13, Xavier was facing obstacles that would be difficult for anyone at any age or life stage. His parents had recently divorced, and he lost all of his possessions in a house fire. With few goals and low self-esteem, Xavier never really stood out among his peers. He was not overly popular or athletic, and he did not excel academically. His mother recognized that he needed something else in his life, so she signed him up with Kansas Big Brothers Big Sisters.

After going through the enrollment process, Xavier met and was matched with his new Big Brother, Air Force Maj. Joe Hunt, who was stationed at McConnell Air Force Base in Wichita. The pair very quickly bonded over a number of things, including their love of sports cars, action movies and working out.

Over time, Xavier and Joe continued to grow close. As they did, Xavier’s grades even began to improve. Joe gave Xavier one piece of simple, steadfast advice: “Do your very best in every endeavor, and you will be fine.”

After getting an introduction to what it was like to be a military officer, Xavier decided that was what he wanted to do with his life. With Joe’s encouragement, he signed up for JROTC at his school. It was in JROTC that Xavier finally felt like he had found his niche. He quickly rose to the top of his JROTC class, and he earned an ROTC scholarship to the U.S. Air Force Academy Preparatory School, among other honors.

“Without my Big Joe, I never would have taken my first step of joining JROTC; I would have never received a scholarship to the Air Force Academy, and, most importantly, I would never have become the man I am today,” Xavier said.

Today, having retired from service as a U.S. Air Force officer, Xavier works as a civil engineer and project manager for the NASA Goddard Space Flight Center. Xavier’s story exemplifies the level of impact and positive influence that having a Big Brother or Big Sister can have in terms of helping support and provide direction, increase self-esteem and improve academic performance.