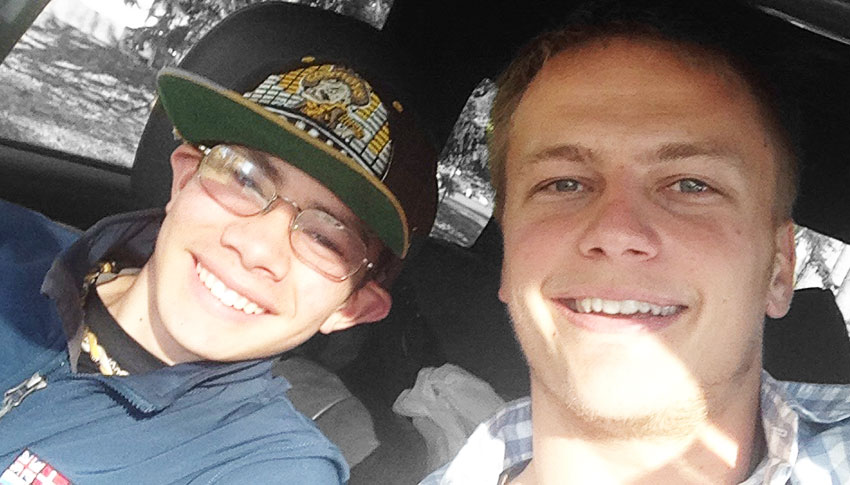 Little Brother Michael had a sad and troubled childhood, his adoptive parents say. “Imagine running away from an abusive situation to be eventually placed with people you don’t hardly know in an unfamiliar town in a different state with a new school and culture.” With all that uncertainty and change, they knew their son needed a Big Brother.

Michael was matched with Big Brother Harrison, who was then a college student. The two bonded immediately. At their first match meeting, their match support specialist and Michael’s mom left them alone to get to know one another. “We played basketball and talked for what must have been two hours,” Harrison says. “It got to the point that [Michael’s mom] said she would go home and I could drop him off when we got done, since we were having so much fun.”

They have continued having fun together for almost four years. “Ever since that first day it has been a nonstop ride of bowling, basketball, soccer, riding bikes, getting ice cream, eating, talking, and some of the most fun I have had in my life,” Harrison says.

Michael says that having Harrison’s support has been life-changing. “I feel like I can say my feelings and talk about what goes on in my life with him,” Michael says. “He is a person who listens to me and helps me to see things in a different way.”

Harrison has also taught Michael by example. As a graduate student studying to be a pharmacist, Harrison has shown Michael the importance of focusing on academics. “We believe Harrison has helped Mike to drastically improve his grades as he transitioned to junior high school this year,” Michael’s parents say.

In the last four years, Michael’s parents have also noticed him becoming more comfortable in his own skin. “Mike is much more confident out in society and in new and uncertain situations than when he first came to us,” his parents say. “Harrison provides an outlet for Mike away from us and his daily concerns.”

To this day, Mike says these outlets are still light-hearted and fun for the both of them. “More often than not, when we get done playing sports or doing whatever it is we’re doing, we’ll be on our way to drop Mike off, but neither of us wants to stop hanging out yet, so we’ll turn up the music in my car and drive around for a while longer just to hang out for a bit more.”

After all these years, Big Brother Harrison and Little Brother Michael have still retained the excitement and shared bond they discovered at their first match meeting.