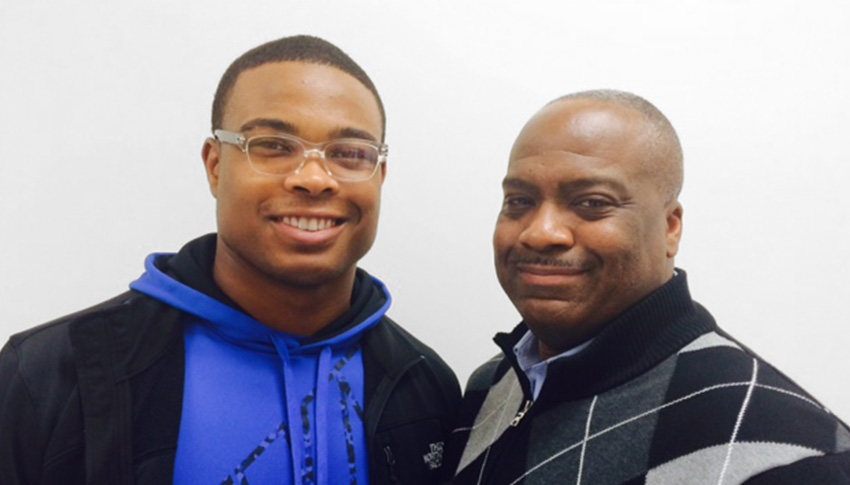 Every Friday night for years, Big Brother John sat on a bleacher, cheering on his Little Brother Leondre. John never missed one of Leondre’s football games, and supported him off the field as well. He even joined Leondre’s school’s “Quarterback Club,” which is designed for players’ dads.

“Leondre grew up without his father, as did I,” John says. “I grew up poor in a home without a father or any prominent male figure to help me navigate the path to manhood. I wanted to give Leondre that much needed, positive male figure.”

A positive male figure was exactly what Little Brother Leondre’s mom was looking for when she signed him up to be a Little. “I was worried about raising him by myself. As a woman, I knew I could raise Leondre to be a good person,” she says. “I didn’t know how to teach him to be a good man.”

“When you look into the eyes of a young boy and tell him that you are going to do something, you have to follow through.”

Leondre says that their similar upbringings allowed him to trust John. He was instantly able to see him as a role model for his behavior and ambitions. “John and I grew up exactly alike,” Leondre says.  They both grew up without a father, raised by single mom, and often caring for younger brothers and sisters. The challenges John faced were more than circumstances to overcome—they helped him become a loving, ambitious person, Leondre says, and he looks up to him for that.

When Leondre was first matched with John, more than eight years ago, he was struggling at school and was a C student. Big Brother John encouraged him to take school more seriously and impressed upon him that he needed to not only pursue athletic achievement but also academic competence and educational goals. “He has motivated me to attend college and get an education and have a positive future and help my family,” Leondre says.

According to Big Brother John, Leondre has grown to be a role model for other students in the classroom and other players on the field. Leondre even says one day he would like to “pay it forward” by becoming a Big Brother himself.

Now, Leondre is in his second semester of college at Walsh University in North Canton, Ohio. He is going to school on an athletic scholarship, hoping to become a social worker. He is still in contact with his Big Brother, John. “He asked me if I would still be his Big Brother once he graduated high school,” John recalls. “I replied, ‘Yes! I want to be there during your college years and…see you graduate college. I want to talk to you about your girlfriends, your wife, your kids. I will always be here for you.’”