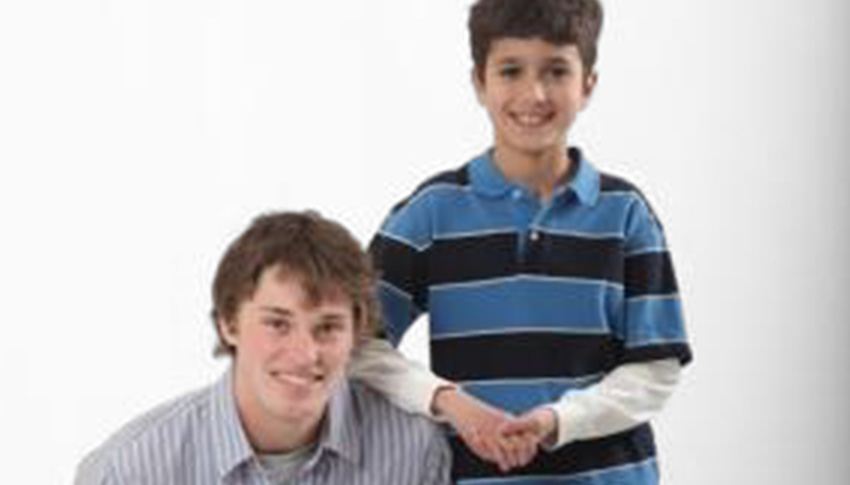 Growing up an only child of a single mom can be lonely, so Little Brother Evan was more than ready for camaraderie and adventure when he was matched with Big Brother Nick, then an MIT student, nine years ago. “Nick and I play sports together sometimes, and he inspires me to work hard to be like him,” Evan says. Through hockey, Nick showed Evan how to be a good teammate, be confident, and challenge himself.

When Little Brother Evan and Big Brother Nick were first matched, Nick was attending MIT and playing on the MIT hockey team. Little Brother Evan and his single mom became Nick’s biggest fans. They attended every home game and most away games. Evan became an extension of the team. He assisted with the scoreboard, volunteered to take down the rink at the end of the season, and even skated with the team during practice.

“He inspires me to work hard to be like him,” Nick says. After playing for six years, mostly with Nick and his friends, Evan tried out for his high school hockey team and became a varsity hockey player.

As an only child of a single mom, Evan has had a limited support system. He and his mom are close, but being a family of two is not always easy. “For any child who represents exactly half of the family unit, there is for the child an imperceptible and constant sense of vulnerability and unease. It’s the feeling of being almost alone in the world, or one adult away from having to fend for oneself,” Evan’s mom says. “Nick, by being a stable and consistent part of Evan’s life, has calmed this sense of vulnerability.”

“While teaching Evan, I have become a more confident, patient, and empathetic man. When the time comes, I know the experience will make me a better father.”

Throughout his childhood, Evan lacked self-confidence and struggled to make friends. Diagnosed with Tourette’s Syndrome, Obsessive Compulsive Disorder, and a language disability, Evan was often frustrated with himself and uncomfortable in social situations. Nick says that for a couple of years, Evan would repeat the same phrases again and again, phrases that didn’t fit with the context of the conversation. “These are known as verbal tics, which are a hallmark of Tourette’s Syndrome,” Nick says. “Later, he would frequently say ‘I wish I didn’t have a learning disability’ or ‘I wish I wasn’t born like this.’”

Playing hockey has helped Evan both with his self-confidence and with his ability to make friends, and Nick has been there to support him. “I encouraged him to fight through these struggles, to embrace who he is, and to focus on what he can control,” Nick says.  He also found stories about successful people who had persevered through similar adversity and used these to try to inspire Evan. “Nick makes me feel good about myself,” Evan says.

Now, Evan is an honors student in high school. He is diligent about his schoolwork and committed to achieving his goals. And he has learned coping skills and self-acceptance from his mom and Big Brother. “I have not heard him repeat the verbal tics or complain about his learning disabilities in over a year now,” Nick says.

Just by stepping up to become a Big Brother, Nick doubled the number of important adults in Evan’s life. But he did even more than that for Evan, Evan’s mom says. “Nick, through introducing Evan to his larger group of friends, provided many good role models for Evan – men and women who were undeterred by hard work, who excelled at school and athletics, and who longed to change the world for the better. So it wasn’t just Nick modeling this behavior, but Nick’s large group of friends, too, whom Evan got to know,” Evan’s mom says. “All of them illustrating for Evan what is possible in life when you are determined and focused and committed.”

Editor’s note: BBBSA received permission from the family to name Evan’s diagnoses in this story.