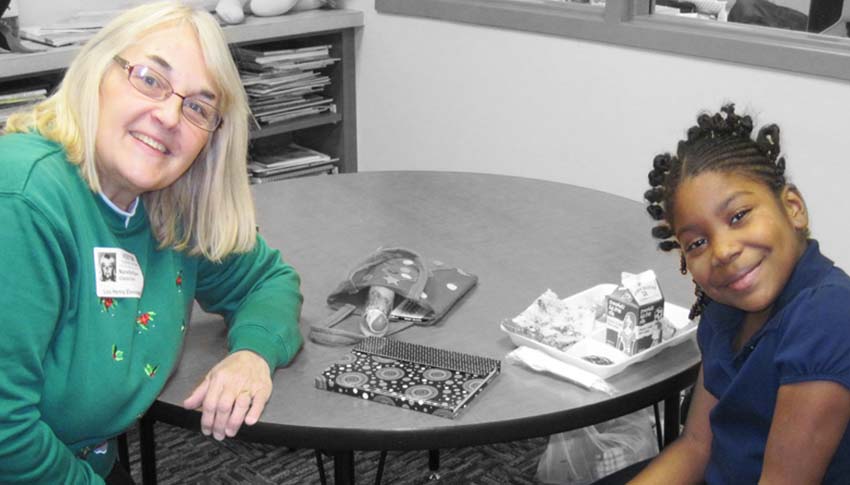 When Moranda’s mother first enrolled her in Big Brothers Big Sisters, she was looking for someone to bring Moranda out of her shell. One of four kids, Moranda was a shy child living in a small apartment with a single mother.

Moranda was in second grade when she was matched with Big Sister Nan. More than five years later, she’s shed her shyness. She’s now described as social, outgoing and adventurous. “Nan has given me confidence in everything I do,” Moranda says. “This includes school work, playing the violin, and singing in chorus.” The once-timid Little Sister has also given speeches at Big Brothers Big Sisters events, sharing their match story so others might volunteer or support Big Brothers Big Sisters of Northeast Iowa.

At “63 years young,” Big Sister Nan relies on Little Sister Moranda to let her know what pre-teen girls are into. “Despite our big age difference, she amazes me with how much she knows,” Nan says. “And I think I amaze her with how much I have experienced from living in what we like to call ‘the good ol’ days.’”

Big Sister Nan says they have learned together “the value of true friendship, trust, empathy, kindness, laughter, love, and faith.” Nan says she benefits just as much as Moranda does from the time they spend together baking, cooking, bowling, going to the movies, and having picnics.

“ No matter what paths our lives take, I hope we will always keep in touch and encourage each other. After our involvement with Big Brothers Big Sisters, our lives will never be the same.”
– Big Sister Nan

“Spending time with Moranda is like a very sunny day,” she says. Together, they work to spread that sunniness into their community. “We feel that no matter how little money we have, we can always do something to brighten another person’s day,” Big Sister Nan says. At a local nursing home, they have played games with the residents and sung Christmas carols.

Moranda’s mother says Nan’s positivity has had an effect on their whole family. “We have learned that if you surround yourself with good people and make an effort to recognize their positive contributions to your life, you will have less negative experiences with others,” she says.

Just knowing Moranda has her Big Sister’s support helps Moranda’s mother, she says. “Sometimes I am in a lot of pain due to my health,” she says, “but by speaking with Nan, my heart melts because I know that there are good people out there in this world.”