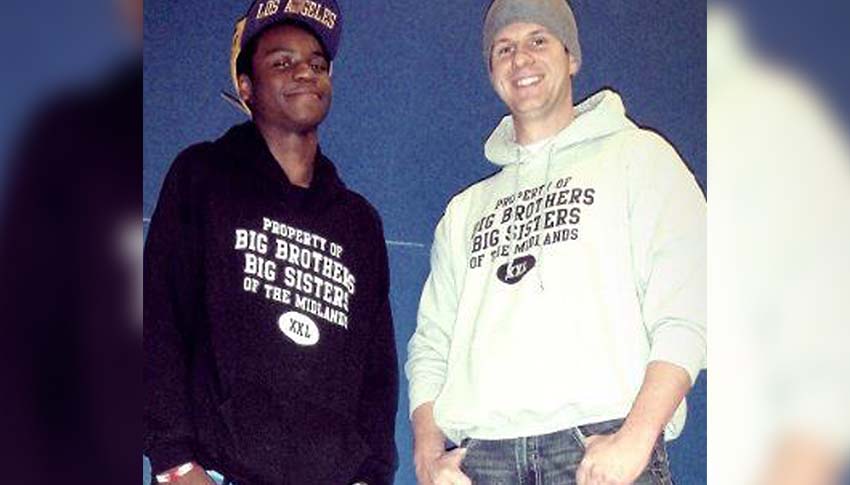 Big Brother Rusty grew up in a North Omaha neighborhood that struggled with poverty, drugs and the pressures of gang culture. When Rusty signed up to be a Big, he hoped to get a Little who was from the same neighborhood as him so he could easily relate to the local struggles. Rusty understood that when young people get advice from someone who they feel “doesn’t get it,” the advice can be dismissed quickly. In August 2010, Rusty was introduced to his new Little Brother, Ja’Roderick (JD). Rusty was ecstatic that his new Little Brother was not only from the same neighborhood but that he also attended the same schools and liked the same sports as him. “Our bonds allow him to open up to me about the specific pressures he deals with,” said Big Brother Rusty.

“It was hard at first, meeting some random dude that I didn’t care anything about. I didn’t know what to think, but I found out we had more in common than I expected,” said Little Brother JD.

Rusty and JD now enjoy movies, eating out, laser tag, attending agency activities, and visiting Omaha’s zoo and Worlds of Fun in Kansas City. They spend time at the library doing homework and visit their high school to toss a football or play some hoops. Big Brother Rusty and JD attend sporting events including the College World Series and college football games.

With high school in full swing, Rusty has encouraged JD to think about life beyond high school and explore career opportunities. In 2012, while doing a TV interview together, JD mentioned how much he was enjoying a CAD drawing class he was taking at school. A professor from the University of Nebraska College of Architecture saw the story and contacted the agency to offer JD a scholarship to that summer’s architecture camp for high school students. During the week of camp, apprehension turned to pride, and Little Brother JD couldn’t wait to show his mother and Big Brother his accomplishments from camp. Soon after, JD was able to join the HOBY Leadership Camp, where Rusty volunteers each summer as a counselor. All this success allowed JD to get a new perspective and offer his views to kids from rural communities.

Seeing how much his Big Brother has influenced his new path, JD hopes to someday volunteer. “I have thought about one day giving back to my community and the organization by sharing my story and knowledge with my own Little Brother,” said JD.

Big Brother Rusty mentioned that when he was JD’s age, he “was a person who felt limited by my circumstances. I believed that where you started limited where you could go.” JD has inspired Rusty in also reaching higher than what he thought was the ceiling for him. He recently changed his career in finance to enroll in a post-baccalaureate program to prepare for a career in medicine. When they both first met, they were looking for something. As more time passes by, they realize their bond is something they couldn’t have predicted.